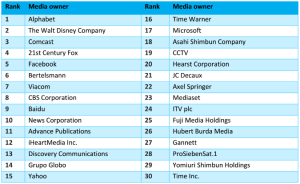 Google is officially the biggest media company in the world, followed by The Walt Disney Company, no surprise there. But what is surprising is the margin by which Google took the lead – 166 per cent.

The Chinese search giant Baidu is the second fastest growing media company falling just behind Facebook, according to a report by media agency Zenith.

Baidu’s media revenue grew by 52% over the last year and Facebook’s by 65 per cent for the year.

Alphabet, Google’s parent company copany is 166per cent bigger than Walt Disney is second in terms of media revenue. Walt Disney grew 17 per cent year on year and is worth $60bn.